This project involved the design of a stormwater management system for a contributing area of approximately 32hectares. The strategy involved a “treatment train” approach that included lot level infiltration, conveyance mechanisms such as pipes and open channels, quality control pre-treatment in oil/grit separators, and two end-of-pipe systems. The larger end-of-pipe system was designed as a wetland type facility, including a forebay, a permanent pool, and extended detention capacity. A multi-staged outlet structure was designed in order to route the discharge from the pond to two different existing wetlands, in to maintain a post-to-pre water balance to the wetlands. The second end-of-pipe system was designed as a bioretention facility with an underdrain system due to the low permeability of the underlying soils. The construction of this subdivision is currently underway. 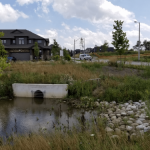 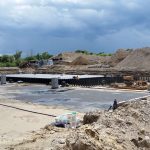