This project involved the preliminary design, detailed design, regulatory approvals, preparation of tender documents, contract administration and construction inspection for the rehabilitation of the Parry Bridge in Chatham. A three span, double-leaf bascule bridge built in the 1950s, the Parry Bridge had not been operated as a movable bridge in over 10 years. The Municipality identified the need to rehabilitate the superstructure of this bridge after a load limit evaluation was completed that resulted in a 9 tonne load limit being placed on the structure. GMBP was subsequently retained to complete the detailed rehabilitation design to remove the load limit. Other features of our rehabilitation design included widening of existing sidewalks over the bridge, removal of the existing control tower, abutment rehabilitation and stabilization as well as bearing replacement. Our scope of work also included the prequalification of contractors to bid on the proposed works. Additional to the original scope of work, GMBP completed road works to the adjacent intersection including new sidewalks and resurfacing, and new electrical and street lighting design for the bridge through a sub-consultant. This project had strict timeline requirements to utilize government funding sources, which were met by GMBP and the contractor. 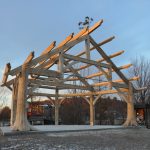 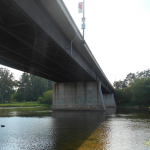